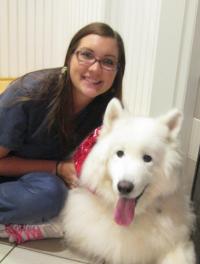 Hospital Administrator, April Shaffer was first introduced to PVH when she participated in an internship program while attending business school. She enjoyed the hospital so much that she applied for a permanent job and was hired as an administrative assistant in July 2007. She went on to work as a receptionist in client relations, then took over the roles of both inventory coordinator and client relations coordinator before becoming Office Manager and now Hospital Administrator.

Born in Lancaster, April has lived in Red Lion since the age of four. Her unusually fervent interest in the business world began at an early age. In fact, she often jokes that as a child she spent more time watching the NASDAQ channel than the Disney channel! After graduating from RedLionHigh School, she earned an associates degree in business administration from YTI Career Institute, followed by a bachelor’s degree in the same field at CentralPennCollege.

A lifelong passion for animals also began early on in April’s childhood. She remembers a constant, loveable parade of dogs, cats, guinea pigs, fish and hermit crabs that her family shared their home with. In fact, April credits her parents for teaching her the most about responsible pet care.

“My mom and dad led by example,” she recalls. “They went above and beyond for all their pets.”

April has collected many fond memories of her family life that involve animals, and often, an adventure! There was the time her father created a homemade oxygen tent to save her pet guinea pig. Then there was the occasion of her senior photo shoot at a photography studio. April had chosen to include her beloved dog Sonic—a large breed Samoyed with huge paws and lots of white fur—in the photo. All went well on the outdoor set until the end, when Sonic suddenly decided to perform a belly flop into the nearby pond—taking all the expensive camera equipment with him!

But perhaps the most bizarre event involved April and both of her parents. Driving home late at night, April’s dad spotted a sad little kitten by the road who was severely underweight. He pulled over and began feeding her some pretzels he had left over from his lunchbox. When he returned home a few minutes later, April’s mom wondered why he hadn’t just brought the kitten home, so she drove off in April’s car to complete the rescue. Locating the spot and the kitty, she pulled over and left the car in neutral . . . on a hill . . . without the emergency brake . . . very close to a creek. The story ends with April’s car upside down in said creek, but with a beautiful and very grateful stray kitten named Guinevere finding her forever home!

With strong family values which always included the household pets, April’s passion for animals figured prominently into her choice of career.

“Animals are easier to love than most people,” she says. “Growing up, I had pets that needed special care, so I was always at a vet. It is like a second home.”

The job offer at PVH came about at exactly the right time, and seemed tailor-made for a young lady with a sharp mind for business. “I had the opportunity to combine my love of animals with a career in business,” April says. “After doing my internship, I already liked Dr Schmidt and the hospital very much. You couldn’t ask to work for a better person.”

April accepted the position of office manager in 2013. Her daily responsibilities include overseeing the client relations department, assisting the hospital administrator, auditing the daily reports (along with patient exam notes and invoices), and handling client concerns. Moving forward, April is delighted to play such an active role in the future of the hospital and its growth.

“Even if I didn’t work here, I’d still think that PVH is the best,” she says. “You find yourself being willing to cheer for the hospital, defend it, recommend it . . . all because you’re so passionate about the high level of work that we do here.”