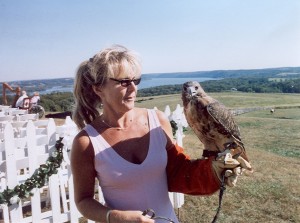 Mitzi Eaton is one of two staff members in charge of medical records at PVH. She is also one of the longest standing members of the team, beginning her career in 1979 when PVH was known as Red Lion Animal Hospital. She spent many of those years working as a surgical nurse, and in 1981 achieved her state board certification for veterinary technicians.

Mitzi also has experience with the human side of health care, having worked as both a nurse’s aide and lab assistant at Memorial Hospital. The job prepared her for animal health care in many ways, and introduced her to medical terminology that she still uses. She describes the line between human medicine and veterinary medicine as “very interchangeable”.

Although she has worked with all kinds of animals over the years, Mitzi holds a special passion for birds of prey—eagles, hawks, owls, falcons and vultures—all of which are found locally. With human encroachment of their natural habitat, the birds will often find themselves living or feeding close to heavily traveled roads, utility lines, and many other manmade dangers. When the inevitable injuries occur, this is where Mitzi steps in.

As a state and federally licensed rehabilitator, Mitzi will take in and care for injured birds of prey until they are ready to be released. Many come to her badly wounded and need assistance to heal and to feed. The birds will remain in her care until they recover, and will either be released back into the wild or placed safely in an educational facility such as Zoo America in Hershey.

Mitzi spends much of her free time educating adults and children about birds of prey, with presentations to local scout troops, school assemblies, and civic or environmental groups. She brings countless stories about her efforts to assist and rehabilitate these magnificent birds, and recounts the happy moments when she is able to return them to the sky. Says Mitzi, “It’s extremely gratifying to just let them go . . . to see them fly away.”