The Scoop on Dogs Eating Poop: Can Dogs Get Sick from Ingesting Stool from Other Species?

The Scoop on Dogs Eating Poop: Can Dogs Get Sick from Ingesting Stool from Other Species? 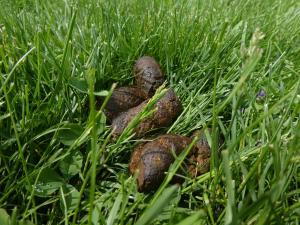 We love our dogs and many of us kiss our dogs and allow them to lick or kiss us, too.  But, if you have a dog who eats poo (also known as coprophagia), those doggie kisses aren’t so sweet.  While it’s a thoroughly disgusting habit in which even my own dogs are known to indulge, can eating poop make your dog sick?  Here’s the lowdown on whether or not your dog is at risk for any parasites from various forms of feces.

Rabbit Poo—Dogs looove to eat rabbit poo.  Something about those little round pellets is just irresistible to our canine companions and most dogs scarf these up like candy.  But is there anything harmful in rabbit poo?  No, not really.  Sometimes, we will see an organism like Eimeria (a single celled microscopic protozoa) in the stool of dogs who have eaten rabbit poo.  The good news is, Eimeria is not parasitic in dogs.  It poses no threat to our pups, it just “passes through” their intestinal tract when they eat rabbit droppings.  No worries and no anti-parasitic treatment needed if your pup likes bunny poo.

Bird Poo—Bird droppings are probably not consumed as much as those of bunnies, but, some dogs do like to indulge.  If you own a pet bird, and your dog likes to forage under the cage, there shouldn’t be any concerns.  Wild bird poo also poses little risk.  Birds can carry intestinal parasites like giardia and coccidia; however, there are many “strains” or types of these organisms and they tend to be species specific, meaning the type of giardia that infects birds would not be the same as the one that typically infects dogs.

Poo from Deer and farm species (cows, horses, sheep/goats)—Pennsylvania is still fairly rural and, even in populated areas, deer are common.  Farm dogs often eat manure and many dogs eat deer poo as well. Again, most of the parasites carried by these species are specific to the species infected and are not parasitic in dogs, so sampling some horse manure or goat droppings is not likely to make your pet sick.

Cat poo—Dogs also seem to have a special fondness for raiding the litter box for cat poo, chomping those litter-encrusted “cigars” like they’re the best treat ever.  This could pose a problem as cats may carry some species of roundworms and hookworms that can infect both cats and dogs. It is thought that the single-celled organism known as giardia could also be spread from dog to cat through ingesting poo.  So, while in most cases, if your dog is perusing the litter pan for a late night, he or she is unlikely to get sick, but, if your cat has worms, there could be some concern.

Dog poo—Obviously, eating other dogs’ poo could also spread parasites to your pooch so try to prevent your dog from snatching feces at the dog park or on walks.  If he’s eating his own poo and has a parasite, he could get re-infected. Otherwise, the only risk is being shunned by family members!

Raccoon poo—I don’t know how often dogs have access to raccoon poo, but this one is definitely a concern.  If you have raccoons on your property, especially if you have a raccoon den or if you go camping with your dog, do not, I repeat, DO NOT, let your dog eat raccoon poo.  Raccoons can be carriers of a deadly parasite called baylisascaris. This roundworm can infect both humans and dogs.  Thankfully, infections are rare, but they can be very serious causing severe neurologic signs, and no drugs have been found to be completely effective in treating this parasite.  This is scary stuff so make sure your pets don’t have access to raccoon dens.

From the CDC: “Fewer than 25 cases of Baylisascaris disease have been documented in the United States. However, it is possible that some cases are incorrectly diagnosed as other infections or go undiagnosed. Cases have been reported in California, Illinois, Louisiana, Massachusetts, Michigan, Minnesota, Missouri, New York, Oregon, Washington andPennsylvania. As of 2018, there were 23 published human neurological cases in the US; six of the infected persons died.”

So, for the most part, if your dog likes to snack on stool, it shouldn’t cause serious illness.  But try to avoid having your dog eat cat poo, poo from unknown dogs and especially raccoon poo!