Could Insects be the Next Protein Source in Pet Foods?

Could Insects be the Next Protein Source in Pet Foods 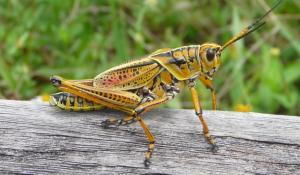 While the thought of eating insects still creeps out most of us in the Western world, many indigenous peoples and other cultures around the globe augment their diets with various types of bugs on a regular basis.  And, while Insects are obviously a mainstay of the diet of many pet reptiles, what about feeding insect proteins to dogs and cats?  As weird as it sounds, there may be a growing market for insect-based foods and treats for our furry friends on the horizon.

It makes some sense to consider using bugs such as mealworms or black soldier flies as a protein source in pet foods.  Insects such as crickets are similar to beef in calorie and protein content gram for gram and are lower in fat. They are also a sustainable source of protein and energy.  Raising insects obviously takes up much less space and uses fewer resources than raising livestock.  There is also agricultural pressure to produce meat such as beef and poultry for both human and animal consumption and there may be competition and difficulty meeting demands for meat to feed people in the future due to our ever-growing world population.   Insect proteins could also be useful in creating hypoallergenic foods for dogs with protein allergies to common ingredients like beef and chicken.

More studies are needed to determine if insect-based dog or cat foods are nutritionally sound, but, it seems like a promising alternative to traditional proteins.  There are already a few treats on the market using cricket flour such as Chloe’s, Chirpies and BugBites.

Using bugs in pet foods is still a bit of a novelty at this time, but it might become the norm in the future.  And I know at least one dog who wouldn’t mind—my dog Marty loves to catch and eat crickets in our yard, so I don’t think he’d have any problem making the switch!