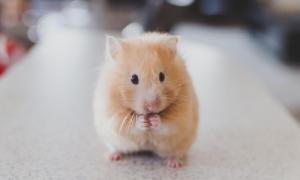 What is Wet Tail?

We talk a lot about problems in dogs and cats, but Patton Veterinary Hospital does see pocket pets and exotics as well.  Proliferative ileitis or “wet tail” is one of the most common problems seen in pet hamsters.  But what exactly is wet tail?

Wet tail is a term used to describe watery diarrhea in hamsters which may have a variety of causes.  The exact cause of proliferative ileitis is not known, but it is thought to be caused by a variety of intestinal bacteria such as Campylobacter, and Lawsonia intracellularis.  Other factors such as poor diet, overcrowding and stress may also contribute to wet tail disease.

Wet tail most often affects very young hamsters 3-6 weeks old, but hamsters of any age are susceptible.  Many hamsters are affected while still at the pet store.  Long haired Teddy Bear hamsters may have a higher incidence of this illness.

This condition causes severe watery diarrhea which leads to matted, unkempt fur around the tail, loss of appetite, and dehydration.  Affected hamsters may also sit in a hunched posture and have blood around their rectums.  Hamsters can die from this illness. Death may occur in as little as a few days to a week.

Despite a poor prognosis, if infected hamsters are examined as soon as they become ill, they may be treated with antibiotics and supportive care such as fluid therapy and anti-diarrheal medications.  Survival rates are low, but some may fare well if treated early.