Is Pumpkin Pie Spice Harmful to Your Pet? 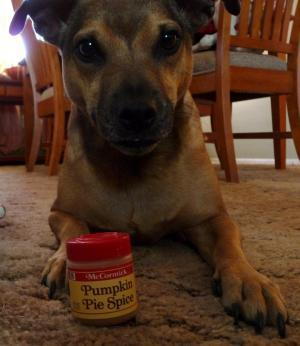 The Dangers of Pumpkin Spice

Pumpkin spice is found in everything and I mean everything this time of year (pumpkin spice butter?  Pumpkin spice soda?—yeech!).  Confession, I don’t really like pumpkin spice flavoring in anything other than pie, so, I may be a bit biased in writing this article.  Apologies for my title as well—it may be a wee bit misleading as a sprinkle of pumpkin pie spice or a bite of food containing the spice is not likely to harm your pet.  However, a few of the individual ingredients could cause problems in large amounts.  Love it or hate it, it seems to be an inevitable part of fall.  So, which ingredients could be problematic for your pet?

First, what’s in it?  Pumpkin pie spice is typically a combination of cinnamon, nutmeg, ginger, and either cloves or allspice depending on the blend.  Items made with the spice may or may not contain pumpkin.  Pumpkin is perfectly safe for pets, and sometimes helps with digestion and may be recommended for pets with diarrhea or constipation.  Let’s break down the individual ingredients.

Cinnamon--while not toxic in small amounts, a large spoonful of dry cinnamon powder could cause respiratory issues for your pet and, cinnamon oil can be toxic even in small amounts. Cinnamon could cause irritation on the skin our in the mouth.  “Large overdoses of the powder or exposure to the essential oil can lead to low blood sugar, liver disease, vomiting, diarrhea and changes in heart rate (1)” especially in cats.

Nutmeg--believe it or not, nutmeg contains a toxic substance called myristicin.  At the levels included in most foods, it is not likely to be toxic.  However, if your pet ingests a very large amount of powder or, if you happen to have whole nutmeg for grating and your pet eats one of the nuts, it could cause vomiting, abdominal pain, changes to blood pressure and heart rate and even disorientation, seizures or hallucinations (1).

Cloves--again, the issue comes with something like clove oil or maybe ingestion of whole cloves and not so much with the amount of powder used in recipes.  Clove oil as well as the other common spice in pumpkin pie spice—allspice—contain compounds called eugenols which can cause liver toxicity in cats.  Clove oil may also cause vomiting, tremors or seizures and staggering in cats.  Cloves appear to be relatively safe for dogs.  Interestingly, clove powder or oil can cause numbness and is sometimes used as a natural pain reliever in people for mouth pain.

Ginger--generally fine for dogs and cats, but, as per all ingredients, avoid feeding large amounts or feeding pieces of fresh ginger.

As with any table food, we certainly don’t recommend feeding your dog pumpkin spice cookies or allowing your cat to have pumpkin spice yogurt.  But, if your pet accidentally eats a bite of some fall flavored goodie that drops on the floor, don’t panic.  Do use caution with essential oils or extracts, especially around cats.  And while it still feels a bit like summer in York, PA we hope you safely enjoy the flavors and scents of fall with your pets!