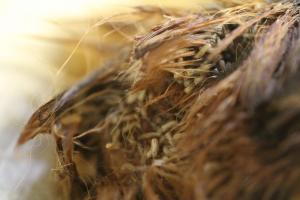 Hot, humid weather brings a multitude of insects, including many species of flies.  While generally harmless, Patton Veterinary Hospital does see some issues in pets related to flies.  Some of the more common problems include bot flies or warbles, maggot infestation and fly strike.

In late summer, flies of the species Cuterebra lay eggs in the grass, usually near rabbit burrows.  When an animal wanders by, the eggs become attached to the fur and soon hatch in response to the animal’s body heat.  The larvae enter the body through the mouth or nose or may enter the skin through an open wound.  The larvae eventually burrow under the skin to mature.  A lump forms with a small hole in the center that serves as a breathing hole.  The larva may be seen moving in this hole, and these lumps are known as warbles.  On rare occasions, larvae may enter the nose and burrow into the animal’s brain causing neurologic signs such as seizures or blindness.   If your pet has a warble, do not squeeze the lump or attempt to remove the larva yourself—rupturing the larva may cause an infection or an allergic reaction.  Take your pet to your veterinarian to have the larva removed.  Antibiotics may also be prescribed.

Animals who are outdoors and are injured and weak or who have fur that is wet or matted with urine or feces may have flies land on them and lay eggs.  The eggs hatch into maggots, which feed on fluids and dead flesh in wounds.  This condition is known as myiasis.  Affected pets may need to have their hair shaved and all maggots need to be physically removed from the pet.  Medications may be given to kill additional maggots and any wounds need to be cleaned and treated.  Affected patients should remain indoors to prevent further exposure to flies. Do NOT attempt to use crazy home remedies to remove maggots—hard to believe but people have tried things like pouring gasoline, bleach, or boiling water on maggots.  These remedies will only serve to further injure your pet.  You can physically remove maggots with tweezers, but it is best to seek veterinary assistance in treating affected pets.

Dogs that live in outdoor kennels or who spend most of their time outside may also be exposed to fly bites on their ears known as “fly strike.”  One would see bleeding, scabby lesions along the margins of the ear flaps with this condition.  It is not life-threatening, but can be very uncomfortable.  Treatment includes either removing the dog from the environment or removing flies from the environment, treatment of the wounds on the ears and possibly application of a fly repellant.   Have your pet checked by a veterinarian to make sure your dog does not have another condition such as mange, which could look similar to fly strike.

These types of infections are not pleasant to see, but they can generally be prevented by making sure your pet is healthy and well-groomed and by keeping pets who are ill or wounded indoors and keeping any outdoor kennels or structures clean and free of flies.  If your pet does happen to be affected by maggots, warbles or fly strike, seek veterinary attention for your pet as soon as possible.

This blog brought to you by the Patton Veterinary Hospital serving York, Red Lion and the surrounding communities.